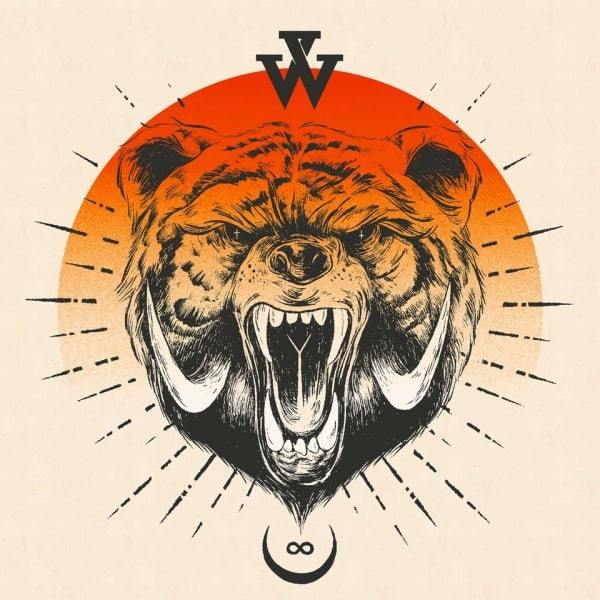 Finally: After six years DER W presents a new album! "V" joins the extremely successful, but above all mercilessly uncompromising discography of Stephan Weidner, head of DER W and lyricist of the Böhsen Onkelz. It has taken a long time, far too long, but a lot has happened in Stephan Weidner's life. Some glorious, some triumphant, not everything was good, but a lot was very intense. The 12 tracks on "V" are the reverberations of a noisy recent past. Feelings are bigger than crises. Weidner and guitarist Dirk Czuya have turned them into music. The sound of one life becomes the soundtrack for a new, better one. "In times like these, it sometimes feels wrong to feel good, but I feel good," says Weidner. "Life has taught me to bear it and never question it. I burn the desire that comes from that in my writing."

For Weidner, 2016's predecessor "IV" was followed by two number one albums with the Böhsen Onkelz and concerts in the country's biggest arenas in front of hundreds of thousands of spectators. At some point after musically and personally intense years, everything suddenly stops and things change for everyone. Time windows close, while doors open and new ideas settle in. So many things turn out differently than they were planned and hoped for. In the end, however, things turn out well for DER W and "V".

The oldest ideas that ended up on "V" are from 2019, from then on everything and everything grew together. Above all, guitarist Dirk Czuya refined Weidner's ideas. In joint sessions, the two developed the album in Weidner's studio in Ibiza. "There are worlds between the first demos and how everything sounds after the "Czuya sessions"," Weidner enthuses about the guitarist, who has been part of DER W since the sold-out tour for the gold-enhanced debut "Schneller, höher, Weidner". "Dirk takes our songs to another level." Michael Mainx, who has been at Weidner's side in the studio for more than 25 years, accompanied the creation of "V" almost from the beginning in the recordings and later in the mix.

"Fortunately for us, the exchange was not digital at all, but on the contrary, very personal," Weidner reports of the final spurt in Corona times. "Dirk and Micha lived in my house during the sessions and we ate and worked together and hung out on each other virtually 24/7." There was never any thought of burying DER W quietly.

Lyrically, on "V" Weidner lifts up those whose road is hard and reaches out to those whose story starts in struggle - like his own. "What stands still is dead. What moves is alive. It doesn't count where you come from, only where you are going" Weidner writes programmatically in the quick "Das Lied vom Blut". Fortunately, the future is not set in stone. There will always be free will - and at the same time something mysterious in life. "V" is the logical consequence and it stands for more than simply DER W's fifth studio album since 2008. In number mysticism, the five stands for loyalty, freedom and the possibility of bringing about change. Everything is in the spirit of the "V".

They have always been his favourite themes: Breaking out of the shadows into a better world and the constant expansion of consciousness. Using one's own strength for one's own vision. That this does not always work out well can also be heard on "V". It is sometimes a battle, mostly with oneself. DER W sets the battle inside to music, sometimes brutal, sometimes reduced. Weidner doesn't want to be pigeonholed with "V". With "Kosmogenesis", the album contains a six-minute declaration of love that comes across as almost opulent. A hymn to the universe, people, one's own daughter and above all to love. Without the latter, there is nothing. Whoever hears it, feels it. At times, "V" harks back to the dark but immensely successful debut "Schneller, höher, Weidner". But in the end, a bright light shines on "V". A new beginning, not a collapse. "V" wants to heal, liberate and strengthen. While the world is going crazy, you are your own best and most important ally.